skip to main | skip to sidebar

As I have said before, biscotti are my favorite cookies to bake. These twice-baked cookies are easy to make and the perfect sweet, and sometimes savory, treat for any occasion.

I came across a forgotten bag of coconut hiding in my freezer. My friend, L, loves coconut, and I was at home all day. So it should come as no surprise that biscotti is what I chose to bring to dinner with friends last weekend. 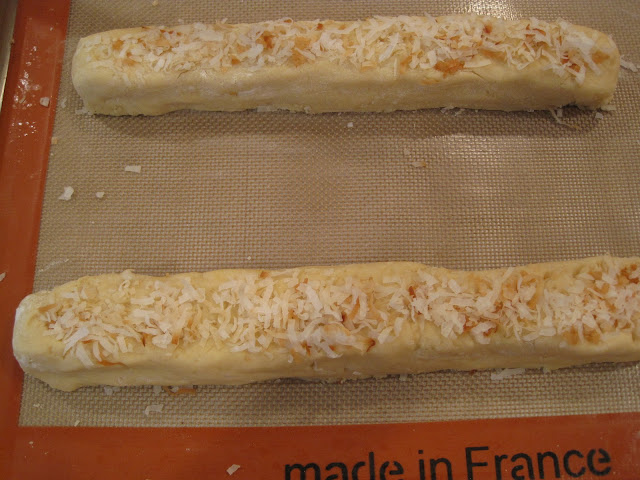 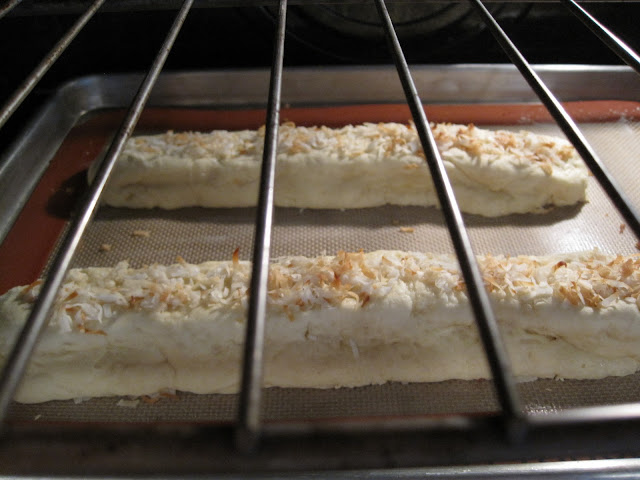 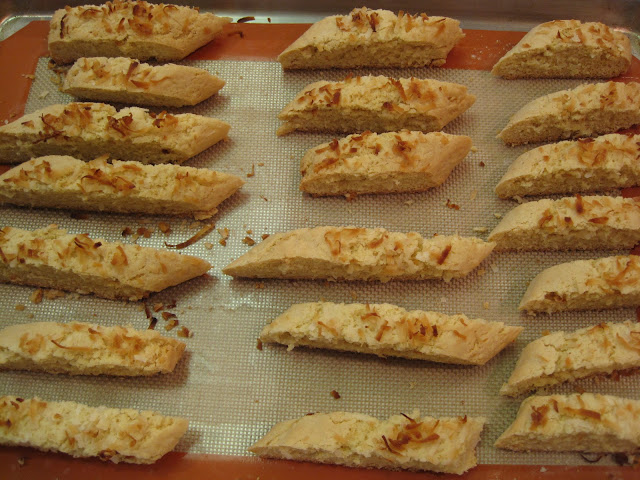 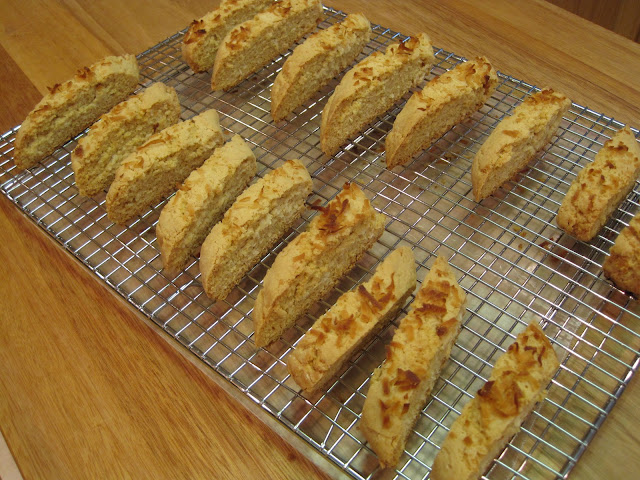 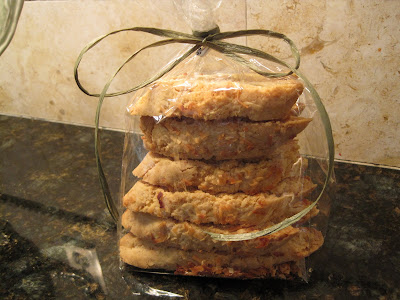 Combine dry ingredients and set aside.

In a food processor, process sugar and butter until creamy.  Add vanilla extract and eggs, and process until combined. Then add dry ingredients and pulse until just incorporated. Stir in coconut.

Form dough into two logs on a lined baking sheet. Sprinkle logs with additional coconut and bake for about 30 minutes until logs begin to color.  Remove from oven and let cool 10-15 minutes.

Cut each log into slices and place standing up on baking sheet. Return to oven and bake for an additional 10-15 minutes. If they color too quickly, turn oven down to 300 degrees.

Note:
You may or may not want to decrease the sugar a bit, as the coconut adds additional sweetness.
Makes about 20 cookies, depending on how large you choose to cut the slices.
Posted by Michele | Cooking At Home at 7:44 AM 8 comments

I've never been one to lament the end of summer. Don't get me wrong, I love the days at the beach and the plethora of fruits and vegetables that summer brings, but by the beginning of September I'm looking forward to fall. The idea of pulling on my favorite jeans and cozy cashmere sweater is quite appealing after the heat and humidity of a New Jersey summer.

John and I spent a few days last week on Cape Cod where our friends P and K have a home. While we anticipated spending the last days of summer on the beach, the brisk winds and chilly weather made that idea moot. Fall is arriving in New England.

I can see the changes already taking place in the markets. Gone are the juicy, fuzzy peaches which now are replaced with towers of shiny red apples and golden pears along with multiple varieties of  brightly colored winter squash.  It makes me excited to think of cooking with these ingredients that have been more or less hibernating for the summer.

The afternoon before we left the Cape, K and I stopped at Cape Abilities farm stand on Route 6A in Dennis. Along with their display of pumpkins and apples, they had an amazing number of ripe tomatoes, and we immediately thought, "tomato soup."

I must admit I've had tomato soup on my mind ever since I read Kath's post over at The Ordinary Cook, in the beginning of September. Her idea of roasting the tomatoes with garlic sounds perfect. But I defaulted to my fallback recipe--one that first appeared in Food and Wine in 1979. Yes, I know my last post, regrettably, was filled with typos--but I really have been making this soup since 1979.

It's a flavorful soup made with a base of onions, garlic, celery and carrots. Add some fully ripened tomatoes, chicken broth and some seasonings and you are on your way to a very comforting dinner. If you have some end-of-summer tomatoes and some time to spare, give it a try. 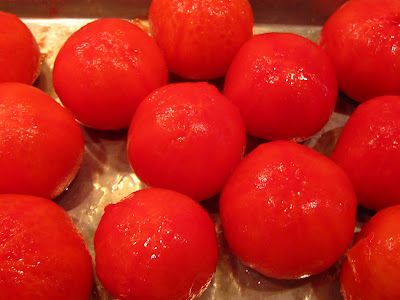 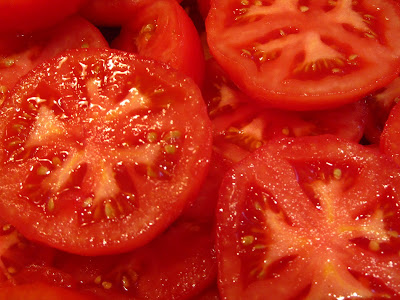 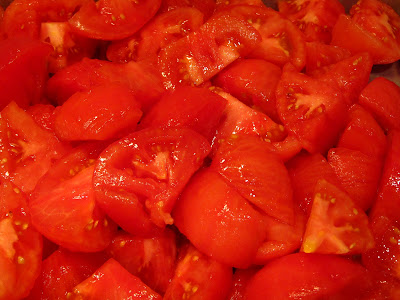 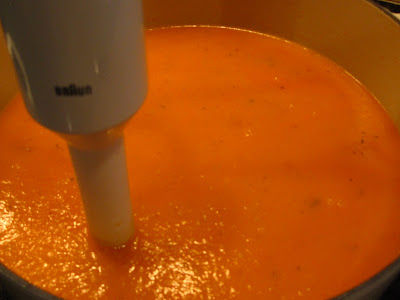 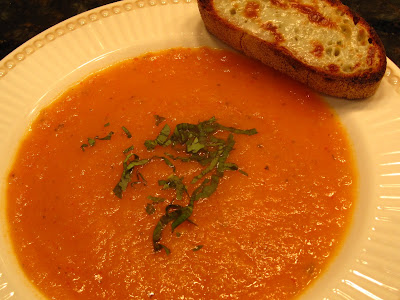 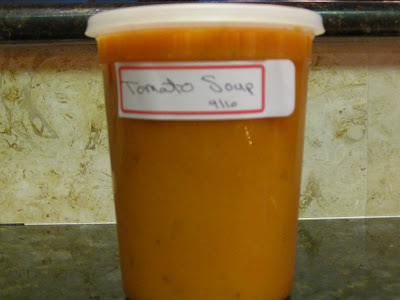 In a large pot, melt butter with olive oil. Add onions and toss to coat with fat. Cover pot and sweat the onions over medium heat, tossing occasionally, for 5-6 minutes, or until slightly softened.  Add the celery and carrots, toss to coat, and salt, pepper, cayenne, basil and parsley. Toss, cover, and sweat until vegetables are slightly soft, about 5 minutes longer.

Meanwhile, prepare the tomatoes. Cut out stems and core; cut in half horizontally and squeeze out seeds; then cut each half in two.  Add tomatoes to pot along with the sugar and nutmeg.  Heat the mixture uncovered; when it comes to a boil, lower the heat and simmer, stirring often breaking up the tomatoes, until the vegetables are beginning to cook down and thicken, about 10-12 minutes.

Add the chicken stock, and bring mixture to boil. Lower heat and simmer, partially covered, about 15 minutes, stirring occasionally. Pass the soup through a food mill, pressing the cooked vegetables through firmly.  Reheat the soup, and correct seasonings to taste.

Since my food mill has been lost in action for quite some time--and I never realize this until I go to use it-I peeled the tomatoes before seeding and used my immersion blender to do the pureeing.  I served the soup garnished with a chiffonade of basil along with crostini topped with Gorgonzola cheese run under the broiler.  My friend K, served hers topped with herbed croutons.


"By all these love tokens
September days are here,
with summer's best of weather
And autumn's best of cheer."
Helen Hunt Jackson

Alone In The Kitchen With A Tomato

I found myself at home for lunch the other day with a few very ripe tomatoes and a small piece of fresh mozzarella.

I decided to cut one of the tomatoes in half, sprinkled the halves with some thinly sliced garlic, salt and olive oil. I then roasted the tomato in a 425 degree oven for about 15 minutes until softened.

Meanwhile, I cut a slice from the mozzarella. When the tomato was soft I removed it from the oven and sandwiched the cheese between the two slices as the heat from the tomato began to melt the cheese. Served with a slice of crusty bread, it made the perfect summer lunch. 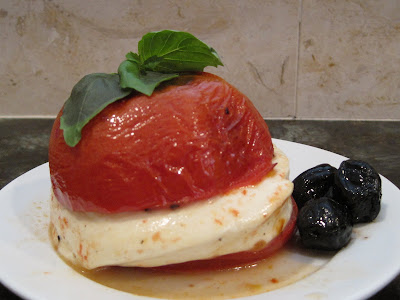 Actually, I roasted the tomato a little longer, about 20 minutes, so it would be oozing its juices. I figured it was just me for lunch, and soaking up the juices with bread was an enticing though messy event.
If you roast the tomato until just done, then add a thin slice of mozzarella until it just turns soft, this would make a great first course for an end-of-summer dinner.
Since the rest of the tomatoes needed to be eaten that I day, I ran with it and continud the tomato theme for dinner with panzella salad. Bread salad. What could be better than that? 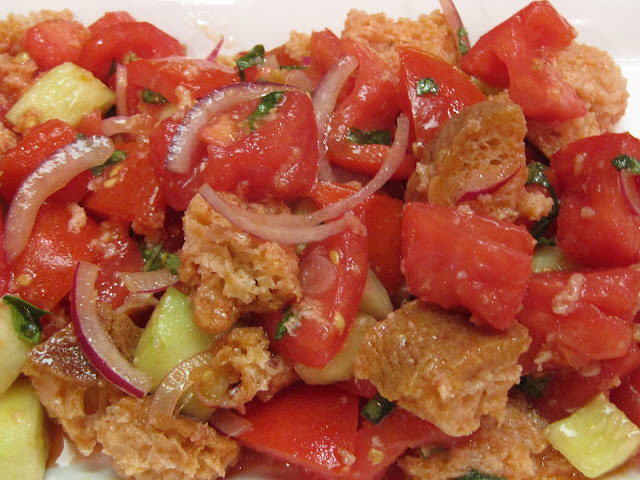 Cubes of crusty bread, chunks of tomatoes, cucumbers and thinly sliced red onions. All tossed with olive oil, red wine vinegar, salt and basil.
With a shrimp vinaigrette on the side, it was the perfect light dinner for a hot evening. 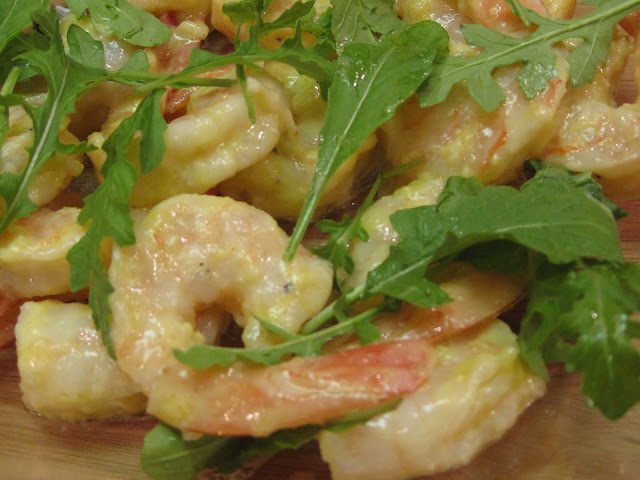 Posted by Michele | Cooking At Home at 6:54 AM 6 comments 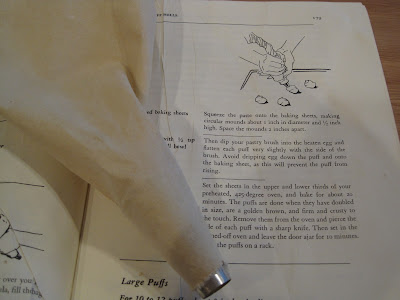